No, The Cloud Isn't Putting Thousands of Partners Out of Business

Why Cloud Isn’t Decimating – and Will Not Decimate – the Channel

It is currently fashionable – as it is every five years or so – for the “industry analysts” to cry out that the channel is dead, massive transformation is needed, etc. Cloud is the latest villain in this repeating play. Some of our industry pundit friends are currently proclaiming that “30% of channel partners will be out of business in the next two years” due to Cloud; and claiming that Product-Centric Solution Providers will have to transform to services-centric or soon go the way of dinosaurs.

This is nonsense for several reasons, all of which should be known by those pundits and analysts who have been around a while, as it is known by anyone who has material experience running a channel partner business.

It’s Nonsense Because Past Such Predictions Have Proven Untrue

Similar horrifying predictions about the channel are made by the industry analysts every five years or so, for a very simple reason: it sells hardware and software.

Yes, each of these has altered the economic model of computing, just never as much as the vendors and analysts initially claim.

Yes, of course, measured on a per-CPU-cycle basis, or a per-gigabyte basis, the cost of computing and of IT operations has gone down dramatically, just as user productivity has gone up.

But that’s not the claim being made by the pundits: they’re claiming that thousands of partners will go out of business.

It’s Nonsense Because End Customers Want Partners to Be There

To say that vendors – especially software vendors – would like to have a robust route to the mid-market and small and midsize businesses (SMBs) around the channel partners is an understatement.

Vendors spend billions in partner recruiting, incentives, training and enablement, only to have a mere 10% of those partners produce 90% of their channel revenue. To paraphrase Churchill, the channel partner model is the worst route to market, except for all the others. As poorly as it works, it works better than anything else they’ve tried.

So if a new computing paradigm – Cloud, anyone? – can promise to enable SMBs and mid-market customers to buy software and computing capacity directly around the costly, inefficient and frustrating channel partners, then many vendors will pursue it with gusto.

Microsoft did, with something as simple as Business Productivity Online Standard Suite (BPOS). The partners rejected it, though of course they had been left out in the cold by Microsoft.

But, to the amazement of Microsoft, so did the customers! To no one’s surprise who has made their living selling IT face-to-face with end customers, they need and want partners to recommend and facilitate product procurement and do implementation and support for them.

They always have, and the reasons why do not change when they are buying Cloud, which, semantics aside, is essentially a product. The smarter the end customer is, the more they know they can’t possibly keep up with all the changes in technology, in technology vendor strategy, and in vendors themselves.

In addition, customers – except for the very largest ones – know they don’t individually matter a bit to the typical global IT vendor.

Both these problems are solved for the customer by relying on a compatible channel partner.

If with the simplest and most elegant of modern applications – Microsoft Office – even the might of Microsoft can’t disintermediate the channel, who else can?

Let’s be clear: the channel as we know it today has been around since the early 1980s, just about 35 years. When we got into the business in 1983, hardware margin was 55% and we did give services away (what little services there were). The drop in average product margin started in the early 1990s, falling to under 20% by the late 1990s, and has not abated since.

As a result, the channel in its original form – the large company-owned chains such as BusinessLand, FutureNow and others (except the exceptional CompuCom), and the large franchisors such as Entre, MicroAge and others – were deprived of the gross margin to support the middle layers of the business model, and shattered into the thousands of smaller, independent partners that appeared in the mid-1990s.

Predictions by the industry analysts at that time, were of course that the channel was dead.

Yet in that time, nine other (services-centric) partner business models have sprung up, now comprising – as objectively measured by the Service Leadership Index®- 83% of the IT Solution Providers in North America. There are not fewer channel partners than back then; there are vastly more.

Today, most remaining Product-Centric companies are striving, as they should be, to become services-led (though appropriately, not to become fully services-centric and they can benefit from help navigating the usual struggles becoming services-led entails). 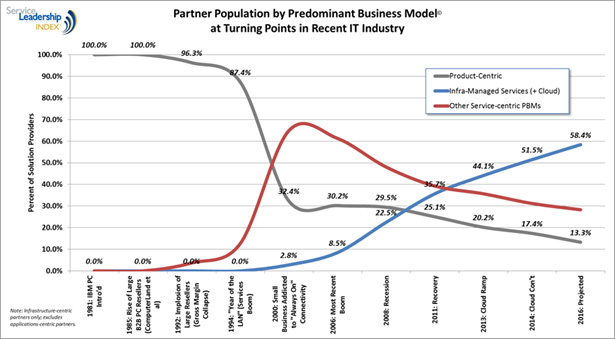 Clearly, channel partner owners and executives are capable of adapting to the changes in computing paradigm; they have been doing so longer than most industry analysts have been in the business.

To say that Cloud will somehow flummox these highly creative, highly motivated and highly committed owners and put them out of business, is a careless, thoughtless, ultimately insulting assertion by industry analysts who have never sat in the business owner’s chair. Indeed, most have never been employed in a partner business and even for those who have, it has been all too brief.

So far in this discussion, we haven’t examined whether the migration to Cloud is actually changing the economic model of channel partners. The Service Leadership Index® is the largest scale, longest-running financial benchmark of partners, so let’s use it to take a look at what is in fact happening, based on partners’ actual income statements.

Is Cloud at the tipping point where all workloads go to the Cloud? Most certainly not. The next chart shows the proportion of the average partner’s total revenue that was delivered by two types of Cloud sales: Cloud resale (where they sell someone else’s Cloud) and private Cloud, where they sell their own Cloud capacity). 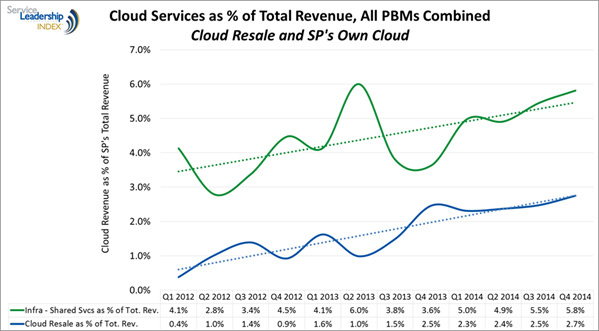 We’ll update this when Q4-15 results are in later this month, but as you can see, for the three years of 2012-14, while there was strong growth in Cloud revenue, it still only comprised a low-single digit share of the average partner’s total revenue. It is notable that Cloud resale is growing much faster than the partners’ private Cloud. That is smart of the partners: private Cloud is costly and doesn’t often succeed at the partner level.

At about 30% year/year growth, Cloud is the fastest growing portion of the average Solution Provider’s (SP’s) revenue. But if current Cloud growth rates continue – which is unlikely since most growth rates slow over time – Cloud resale will be about 17% of the average SP’s revenue in 2017, while Infra-Shared Services (private Cloud) will be about 8%, for a total of 25% of revenue. Material, but well within the rate of change sustained by partners in the past.

What is happening is that everyone is trying the Cloud – as evidenced by the large and rapidly scaling customer counts of the leading Cloud players – but even in aggregate are far short of taking even a 10% share of customer IT spend.

Cloud also remains a still-unproven part of the SP landscape. It is unproven for both the SP and the end customer. It remains to be seen:

This is significant but, as we noted earlier, clearly Cloud will not dominate most businesses’ IT budgets any time soon.

Ironically we’re now also beginning to see de-Clouding. Cloud vendors understandably imply to their prospects that their offerings are "wonderful, weightless, agile, low cost, mobile and free of the impediments of past computing models."

That vision often enough doesn't line up with the reality. Actual customer experience is driving a material number of customers to de-Clouding or to significantly change—reduce—their Cloud strategies to regain a more solid computing foundation and rational cost. One well-known channel partner executive we talked to recently, believes across his customer base that for every 10 companies pursuing some form of Cloud computing, two or three are looking to reduce their reliance on Cloud.

As for the original equipment manufacturers (OEMs), are their business models under pressure? Most definitely and Software as a Service (SaaS)—not Cloud—is the clearest evidence of the power of selling by the outcome.

Let’s take the case of Adobe, which has transformed as a vendor to nearly 100% SaaS over the past few years. Has the Adobe partner eco-system vaporized as the pundits would suggest? No, in fact, it’s thriving.

Indeed, even the two most praised Cloud players (yes, those guys the pundits say are going to kill the channel) have robust channel partner programs as their primary route to market. For example:

More and more, it is clear that the successful path for Cloud vendors is through the channel, not around it.

Lastly, It’s Nonsense Because It Misreads a Mega-Trend

We believe it is true that many partners will sell their companies in the next few years, but largely for reasons unrelated to Cloud or any other technology or go-to-market change. The chart below, showing data from our master Service Leadership Index® database of over 34,000 partners, explains why.

We will update this chart in February when our Annual SP Industry Profitability Report™ for 2016 is released, but the story is clear.

As of the end of 2014, some 24% of partner companies were founded more than 25 years ago. Many of these owners will indeed sell in the next few years, as they have long planned, to their kids, to management, to private equity or to other partners.

You will also notice the rate of formation of new partner companies was influenced by IT industry trends until the 2001 recession. Prior to that recession, the rapid expansion of the IT channel was driven by the rapid adoption of the first three or four waves of PC technology; large customers were radically decreasing their reliance on mainframes and minis in favor of PCs and servers; and, small customers were buying PCs and servers for the first time. The channel was effectively recession-proof and growth was related to waves of technology change.

The 2001 recession was the first one which impacted the IT channel. IT had become a big enough part of the North America corporate budget, and technology absorption had reached such a high level, that recession-driven cutbacks in capital spending in general for the first time impacted IT spending materially.

Since that tipping point, as you can see, the rate of formation of new partner companies has been driven by the broader economic cycle, not by (positive or negative) IT technology trends (such as Cloud) as they might affect the vendor/channel/customer relationship.

So Gartner and IDC might see lots of partners “going out of business” (i.e., sell or perhaps close) which they will no doubt ascribe to the Cloud (or whatever strikes their fancy at the time), but they will likely never notice that most of these were sold by owners in their 60s and 70s, who had long planned to sell.

To the extent that Gartner, et al, might "spook" such owners out of the business with their "sky is falling" claims, they should be ashamed of encouraging any owner, especially one trying to reap funds for imminent retirement, to sell sooner (and cheaper) than they otherwise might.

Lastly, you will also notice that since 2010, the rate of formation of new partner companies has increased each year. We expect this trend to continue when we analyze our final 2015 data.

You don’t hear much about that from Gartner and IDC, do you?

To learn how you can leverage these and more findings of the Service Leadership Index™ - the largest scale, longest running and most accurate benchmark of Solution Provider financial performance, operational maturity and value creation, worldwide – contact us to talk about the tools and services available.